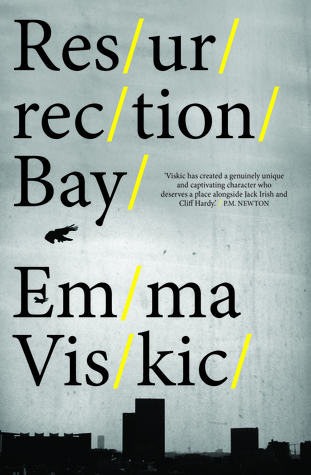 Caleb's world is turned on its head following the gruesome discovery of his friend (and policeman) Greg's dead body at a murder scene. His last contact with the deceased, a text message asking for help and the mention of the mysterious 'Scott'; an name which bares no meaning to Caleb.

Enlisting the services of close friend Frankie, the two set off to catch a killer. However, the police, just as much as those directly responsible for the original murder prove a constant hurdle. Further complicating matters is Caleb's deafness, which in itself make daily interactions difficult despite his well established lip reading and communication abilities.

Caleb's employment is a little ambiguous with the author not defining the circumstances behind Greg's death and the corresponding moonlighting he'd been doing for Caleb's company. Was it a detective firm, onsite security or some thing else all together? Perhaps I just missed it.

Frankie is a character who just didn't work for me; a 57yr old former cop with a drinking and drug habit who also has a shady secret. She's at one point described as passing for a 16yr old then later likened to Caleb's mother. Inconsistency that dims the definitive descriptive nature of the character.

I'm still not sure why Caleb's ex wife is put at risk either, a beautiful Aboriginal woman named Kat. Having had no direct involvement in the cigarettes heist / murder shes plays a pivotal role towards the end of the book without clear cause. Despite this, the ending was action packed flowed at a frenetic pace.

This had the makings of a good book but it just didn't work for me. RESURRECTION BAY has a blistering opening and a great ending so all is not lost.
Posted by OzNoir at 16 November No comments: 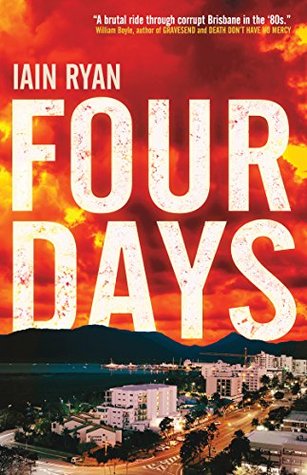 From the back of the book
BRISBANE, 1984. Jim Harris is a hard-drinking Australian detective on his way to a nervous breakdown. Every day, he works alongside corrupt cops and dangerous crooks. That is, until a brutal murder case unravels his career, bringing past indiscretions to light. Alone, afraid, and out of control, Harris makes a pact with himself: Four days to locate the killer. Four days to take revenge. Four days to find redemption

My review
A dark and brooding noir which cuts a bloody trail across the streets of Brisbane and Cains in the 1980's. Corruption runs rampant and self destruction is a given as the characters of FOUR DAYS battle criminals, comrades and their own inner demons.

Buried beneath the underworld facade is the murder of a prostitute and the disappearance of a policeman begging to be solved and a lone detectives determination to issue justice. Complimenting the core story is Detective Jim Harris' background, misguided love interest and strange family relations which provides readers with a nice side bar to the main event.

FOUR DAYS is a quick read and easily consumable in a single sitting. A nice addition to the growing catalog of dark Australian crime fiction.
Posted by OzNoir at 13 November 1 comment:

Former Private Eye Matt Cordell is wasting away in a bar when he's approached by a man seeking help for his drug addicted son so he can get the care needs. No sooner had Cordell rebuffed the case offer than the man is gunned down in that very bar.

Professional curiosity leads Cordell to flip through the dead mans pockets and identify him as D'Allessio. Not one to let murder stand idle, Cordell conducts his own manhunt to find the son and perhaps, the killer - could they be one in the same?

The story DIE HARD is published in the back of SO NUDE, SO DEAD (2015, Hardcase Crime) and is a quick-fire PI novelette that provides action, sex, murder, and violence all wrapped up in a nice twist that reads like a complete story. 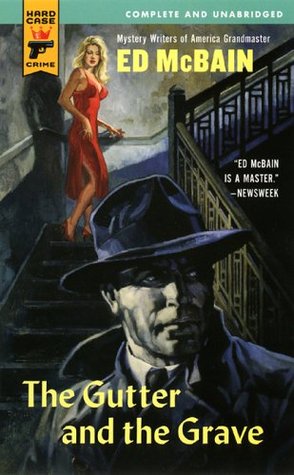 Naturally the novelette got me wanting to read a longer form of fiction featuring McBain's PI, in THE GUTTER AND THE GRAVE (2005, Hardcase Crime). This is the second time I've read the book, and, like most re-reads I found it just as, if not, more enjoyable the second time round.

Reluctantly involved in a murder mystery, the perennial drunk PI Matt Cordell finds himself front and center of a traditional dime-store pulp. With dames throwing themselves at him and cops throwing fists, Cordell catches nothing but trouble in this fast paced case.

Ed McBain builds a lot of back story into Cordell's failed relationship, run in with the law to provide context to his present day predicament all the while keeping the focus of the novel clearly on the whodunit theme and the quest to clear his friend's name.

There's a lot of back and forth switching between suspects until the twist reveals all providing a satisfying ending that makes this pulp ode surprisingly deep.

THE GUTTER IN THE GRAVE is the only full length novel to feature the PI, however there are a few short stories from the 1950's floating around (DIE HARD mentioned above being one of those).
Posted by OzNoir at 12 November No comments: 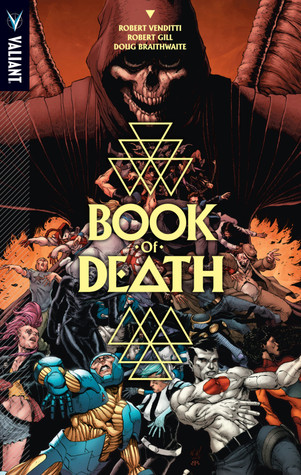 Trade paperback Tuesday is an initiative of Previews World, a comics and associated paraphernalia magazine/catalog/online news resource which promotes the hottest trade paperbacks newly collected and published in the comic book industry. I'm borrowing the theme to focus on regular reviews of my favorite trades and/or comic story arcs.

Title: BOOK OF DEATH
Writer: Robert VendittiArtist: Robert Gill, Doug Braithwaite Published: 2015 (singles) / 2016 (trade publication)Contains: Book of Death (mini-series) #1-4
About
The Valiant heroes. X-O Manowar. Bloodshot. Ninjak. The Harbinger Renegades. Unity. This is how they lived. This is how they died. Now we know. The Book of the Geomancer has recorded it all. But only a young girl the last in a line of the enigmatic mystics who protect the Earth known as Geomancers has seen this future come to pass, from the coming cataclysm to the dawn of the 41st century. Alone with her sworn protector, the Eternal Warrior a soldier battle-forged across five thousand years of combat the duo must defy their allies to stop the Dark Age that now threatens to eclipse our world. Together, they are the number one target of every hero and villain on Earth. Either the Eternal Warrior hands her over or they take him down. But can even he single-handedly protect one child when the entire Valiant Universe wages war against him?

My thoughts
Reading this story in monthly increments doesn't do it justice (the trade isn't out until next year) - the pace seemed off and the middle issues (#2 and #3) felt like set-up issues rather than crucial center pieces to the Darque/Geomancer conflict. However, read in a single sitting the Book of Death's pacing, plotting, and overall feel of is so much more enjoyable.

The reader gets a true sense of the impending doom, death and destruction the world over is to experience should Darque not be stopped. Standing in his way is the Eternal Warrior, protector of the Geomancers throughout time, and Tama, the Geomancer from the future.

Despite all the ripples of time and outcomes of the Valiant heroes glimpsed in these beautifully drawn pages by Robert Gill/Doug Braithwaite, Book of Death is Tama's story, plotting her growth from a timid and semi vulnerable girl to someone brimming with confidence and a true protector/speaker of Earth. The title may center around death yet it's life that prevails as the story reaches its satisfying conclusion.

There are a number of enjoyable cameo's too with Punk Mambo's brief appearance in #3 and #4 a perfect set up for the upcoming Ninjak arc (Operation Deadside). While Unity don't get actively involved in the Darque conflict, their battle with the Eternal Warrior is crucial to the outcome of the book and paves the way for the future look of the team (The Unity ongoing title ends at #25 and I hope we see more of Valiant's answer to the Justice League/Avengers).

Perhaps one of the most pleasing aspects to Book of Death is the subtle shift in the Eternal Warrior's character, from being pure brawn to battling with heart and emotion. Each battle is full of tension with the outcome hinging on his selflessness and genuine desire to be the protector of the Earth.

Book of Death reads as though it was written for trade and that's he way it should be read to fully appreciate what this creative team have come up with. I'd rate this a solid 4.5 out of 5 - Valiant sure know how to write 'event books'.
Posted by OzNoir at 10 November No comments:

Review: SO NUDE, SO DEAD by Ed McBain 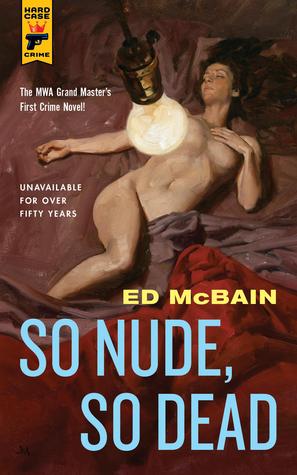 Ray Stone is an addict. A former pianist who has succumbed to his vice. It's while indulging in this deadly habit that he finds himself chief suspect in the murder of young nightclub singer Eileen; the naked blonde who was dead his dead with two bullet holes in her belly.

In order to clear his name, Ray conducts his own drug addled investigation to prove his innocence and find the murderer. As his dependency for his drug of choice dissipates his clarity increases. The pieces of the puzzle form to display a portrait of an unsuspecting murderer.

I really liked this book. The different take on the PI theme is refreshing (despite being originally published well over 50yrs ago) and Ray is a likable protagonist despite his addiction. The pacing is quick and straight to the point and the characters leap off the page.

Posted by OzNoir at 06 November No comments: 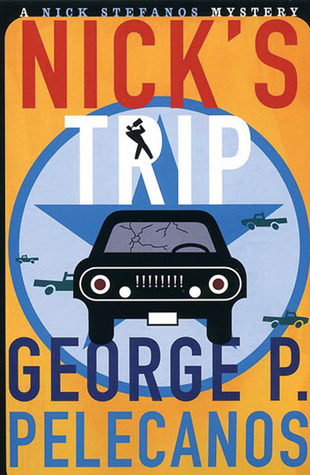 NICK'S TRIP is a booze soaked road trip into the underbelly of greed and deceit. What looks to be a simple enough missing persons case turns complex when Nick's high school friend casually omits portions of the truth to travel with Nick down memory lane, all the while building lies and laying the foundation for murder.

Unlike A FIRING OFFENCE, Nick Stefanos is a fully fledged PI working in a bar to supplement his chosen career. This allows him to pick and choose his caseload. So when an old high school buddy shows up asking for help to track down his missing wife, Nick agrees.

The story largely centers around locating the missing wife, but is peppered with chunks of another case - the murder of one of Nick's friends. This additional case proved a little distracting at times and didn't seem like it was needed with the core case enough to sustain an entertaining narrative.

Other reviews liken the Stefanos books to James Crumley in style and I'd have to agree. The later books by George Pelecanos are much better but NICK'S TRIP is still worth a read.
Posted by OzNoir at 03 November No comments: