Catching up on Crime Fiction: WORLD GONE BY by Dennis Lehane 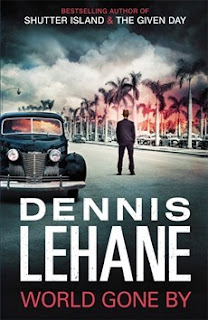 The Coughlin saga ends in a satisfying hail of bullets with WORLD GONE BY reaffirming Lehane’s place as one of my go-to-for-a-great-mob-book authors.

Joe Coughlin has lost his wife and buried many friends during his life as a fedora wearing, smooth dressing gangster but WORLD GONE BY takes his time in ‘this thing of ours’ to new extremes. Learning of a contract being placed on his head by a less than reputable source does little to crease Joe’s smooth veneer – after all, he’s more a businessman these days, too valuable to the underworld to lie six deep but when the threat steadily emerges and the pieces align to a pistol pointed his way, Joe does what he does best – lean on his standing in the crime community to negotiate a deal to keeps his lungs full of air, and his enemies/friends pockets lined with cash.

Yeah, that doesn't quite work out.

WORLD GONE BY is an emotionally charged book thanks to some very good writing and solid plotting. Joe and his crime compatriots are well defined characters that give life the underworld. I’m still left reeling from the conclusion and suspect I will for some time yet – Lehane has crafted cinematic quality structured scenes written to make an impact – and that they do.

Would I re-read? Yes (and its predecessor LIVE BY NIGHT)

Fiction Filed under: Crime, This Thing of Ours, Family Drama,
Posted by OzNoir at 24 August No comments: 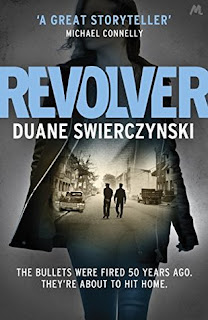 REVOLVER is fine storytelling - seamlessly switching gears through alternating timelines to deliver a multifaceted crime tale, steadily increasing in complexity as the narrative unfolds. Spanning three generations each enveloped in heady blood red mist of murder and mystery surrounding the deaths of Philadelphia cops Stan Walczak and George Wildey in 1965, Swierczynski ensures his fictitious bullet fired some 50years past is still dangerous in the present.

Audrey is a CSI in training, studying her craft from afar, the family outcast is cast into the spotlight when she seeks to uncover the truth surrounding her grandfather’s murder in 1965. With her father (Jim) a cop and brother (Stas), her keen eye and inherent internal compass for justice (albeit a justice that feels slightly out of character) is right on point. What she discovers is just as destructive now as that day when her grandfather and his partner were gunned down. This time it’s not bullets raining down on her family but syrupy secrets and morbid revelations.

The route REVOLVER takes is not conventional and that’s one of its biggest drawcards. Linking different timelines through a single act of violence without giving away the motivation while embedding a complex family drama element is satisfying reading when done right – luckily it is here.

Readers of Swierczynki’s previous works will see REVOLVER as somewhat of a departure from what’s come before and a progression in his crime fiction prowess. While being a self-contained story, the door is left ajar for further exploration into the Walczak world – fingers crossed Swierczynski revisits it again at some stage.

Would I re-read? Yes

Catching up on Crime Fiction: THE STRANGLER by William Landay 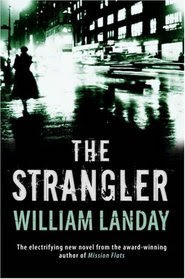 Wow – I wasn't expecting to enjoy this book as much as I did. Jumping in, I thought I was up for a run of the mill semi historical crime novel, what I got instead was a deep seeded mystery with a heavy emphasis on strong characters intertwined in a family drama.

The three Daley brothers; Joe – the cop with a habit of getting in deep with the mob, Michael – the lawyer assigned to the Strangler task force, and Ricky – the cocksure criminal and professional cat burglar each bring a unique angle to the story centered around a spate of murders targeting young and old women alike. On the peripheral is the JFK assassination which does little to impact the story aside from providing context to the period piece.

At times THE STRANGLER read like an episode of the Sopranos, complete with the double crosses, violence, and jovial banter between characters that were staples of the series proper. The thin blue line did little to separate the good-guys from the bad-guys as the Daley struggles fought the system and each other just to stay whole.

Overall, this was a great read.

Pick Up A Pulp [13]: THE VENOM BUSINESS by Michael Crichton 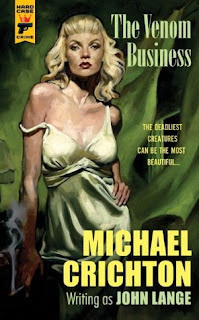 Hardcase Crime, did the reader world a favor when they reprinted Michael Crichton's foray into pulp writing under the pen name John Lange. ODDS ON, DRUG OF CHOICE, and GRAVE DESCEND are all very good reads. Naturally I had high hopes for VENOM BUSINESS, the largest (in page count) of the reprinted / rebranded books. It stated off great but tapered... 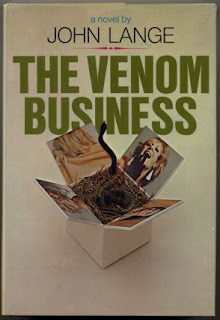 This book was tracking as a 5 star read for me around the halfway mark but a change in direction soiled the story to a degree. Charles Raynaud reads as a James Bond type character; introduced as a professional snake handler, he knows his way around a forest almost as good as a knows his way around women. He's a protagonist full of mystery and intrigue. Equally adapt at smuggling priceless artifacts as he is undertaking murder for hire, his thirst for money lands him in the middle of a scandal that is a little hard to decipher.THE VENOM BUSINESS lacks clarity to how Raynaud gets mixed up in a family drama centered around a big inheritance and relatives with murderous intent. Add to the mix a couple of attractive and willing women and what was a decent read turns murky. I'm not sure if author Michael Crichton during his pulp phase published any more books featuring Raynaud but THE VENOM BUSINESS protagonist has a lot of potential and was the most enjoyable aspect to the book.
Posted by OzNoir at 13 August No comments:

Catching up on crime: ODDS ON by Michael Crichton and DJIBOUTI by Elmore Leonard

Here are a couple of recent reads from my tbr. I've been on a bit of a modern masters crime kick as of late having already read some Ed McBain. It's great to be able to delve into these books but authors who know how to write a damn good yarn. 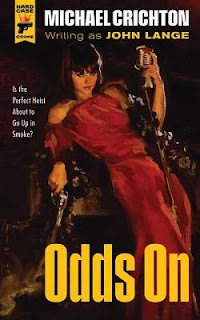 ODDS ON by Michael Crichton

ODDS ON is a fast moving heist novel centered around 3 guys looking for a large score at a luxury resort. Elements of Michael Crichton’s tech-fi are glimpsed here with the heist planned using a computer to determine the probability for success measured against a number of variables. The human factor not withstanding (unknown elements that can’t be factored into the equation), the stakes looked low to garner a high payoff. What ensues is a fun and colorful pulp mixing a free spirited resort mentality, freewheeling men and women, and a plan cooked to perfection. 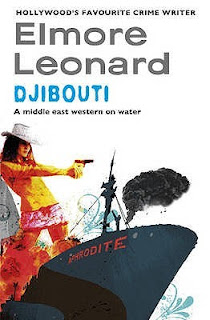 For the first half of the book, Djibouti felt disjointed; meandering through the mundane in a mix mash of present and past tense that did little but confuse. I got the feeling Elmore Leonard felt the same - to an extent. Enter James Russell, the character that set the book on a path to redemption; a linear plot ensued with Russell at the core along with a terror plot to blow the world into submission. Dara, a documentary film maker and her cameraman Xavier are trademark characters; full of life, distinction, and color - they jump off the page and immediately bond the with reader. Much the same goes for the wealthy Billy and his model girlfriend-of-the-moment Helene. Elmore Leonard has always written characters and conversations well - in Djibouti it's no different. Unfortunately it's the early plotting that smeared what would have otherwise been a very good book. The documentary film angle in search of modern day pirates was a interesting concept which lacked a bit of polish in the execution. It was that very concept, however, that linked Russell to Dara and the others, for which I'm glad. Djibouti is a miss then a hit.
Posted by OzNoir at 02 August No comments:

Review: The Summer That Melted Everything 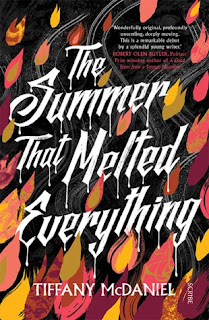 The day the devil came to the small town of Breathed, Ohio, it was in the form of an unassuming young boy, hot on the heels of hell's own heat wave.

Responding to a public notice, this figure sought and found his caller; a disenfranchised lawyer and father of two who had renounced his faith. Autopsy Bliss (a fitting name for a story about the devil) welcomed the 13 yr old boy going by the name of Sal into his home under the assumption he wan't the devil, but a runaway looking for a family.

Sal acclimatized to eventually being part of the warm and loving Bliss family, only for the town to destroy it - perhaps under his influence? A subtle menace or pure circumstantial?

The physiological horror that ensues throughout is complex, distributing and hard to stomach. Paranoia coupled with fanatical belief drives the devil to decay the town's hive mind and sensibilities. The big unresolved question is whether or not the devil is Sal or the townspeople themselves as a collective, cursed by the mere suggestion of the dark prince in their midst.

The Summer That Melted Everything is a lean horror that is more thought provoking than gore splatter.

It's certainly a book that will stay with me for a long time.

I was provided a copy by the publisher in exchange for an honest review.

Would I re-read? Likely