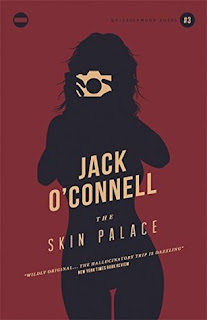 SKIN PALACE paints a picture of a certain kind of book. One where the adult entertainment industry is at the forefront and, being a crime novel, accompanied by an ever present underworld influence. That's not what SKIN PALACE is about. It's a character study and so much more; a steady evolution of character through a decrepit viewfinder.

True, criminalities seep into the seedy underworld of sex, drugs and adultery bringing together critical plot elements centered around film, photography and family drama to form a complex topsy turvy narrative depicted in equal parts night and day. Yet it's the lives of the characters that envelope the reader in a shroud of uncertainty, trying to figure out each angle, plot thread, and core direction of story.

A the center of all that happens in SKIN PALACE is Sylvia who's passion for photography leads her to the Canal Zone; a dangerous quadrant of the city and rabbit hole of sorts which brings together a mystery of a man, a bloodthirsty gang, and a cinema (The Skin Palace) owner who sees something in her that her partner (and lawyer) doesn't - exploitation or opportunity?

SKIN PALACE is complex, interesting, and certainly not what I was expecting - in a good way. Despite being book 3 in the Quinsigamond Quintet it reads perfectly well as a standalone. Highly recommended.

I was provided a copy by the publisher in exchange for an honest review.
Posted by OzNoir at 16 September No comments: 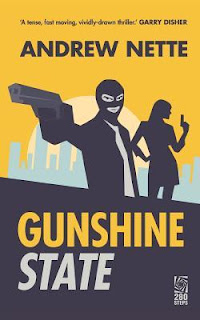 The thief’s theme is rife in this cross continent noir by Aussie crime writer Andrew Nette.

Gary Chance makes his hard earned cash from stealing others hard earned cash. He’s a professional in a profession where the big ‘pay-off’ is the pinnacle but prison is a more probable outcome – if not death. His latest job takes him to the Gold Coast but all is not glitter, gold and sunny beaches. The planning is precise, the target a foreigner with a penchant for poker games and an accumulator of cash. Gary’s newly assembled team (consisting of less than reputable and trustworthy characters) looks set to score but things soon change when bundles of drugs are discovered midway through executing the plan. Unbeknownst to Gary, this had been planned from day one – only no one told him. With the stakes raised, bullets puncture the thinly veiled fabric of Gary’s reality and he’s soon on the run with an unlikely traveling companion from both killers and the law.

Make no mistake, Gary isn’t just a thief, he’s a harden criminal with contacts, motivation, and a knack for getting into and out of trouble. The Parker influence abounds with Gary a well-defined Australian counterpart to Richard Stark’s popular character. Gary is street smart who plays the hardman as easily as he plays the lover. His easy acquiescence to violence akin to Parker at his most dangerous.

GUNSHINE STATE’s distinct stanzas read as bite sized chunks of episodic noir, each comprising a full complement of crime, characterisation, and sub plot which bind together to form part of a broader narrative. While helping to keep the story fresh, these distinct elements enhance the reader experience by flipping the script from a locale perspective and changing up criminalities.

I really enjoyed this book and highly recommend readers of Richard Stark’s Parker series check it out.

I was given a copy by the publisher in exchange for an honest review.
Posted by OzNoir at 02 September No comments: