Review: THE HIT by Nadia Dalbuono 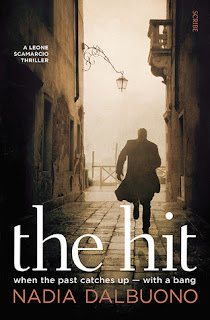 A sudden and dramatic car crash leaves a top television exec dazed and confused; more so when he realizes a good Samaritan is a sheep in wolfs clothing, and is part of an elaborate ruse to kidnap his family. As Leone Scamarcio investigates the nature of the kidnapping a connection to organised crime and a shady brother in-law emerge as key pieces to the puzzle. With the investigation slipping away, and suspects mounting, Scamarcio’s lone wolf investigative approach might not be enough to save the exec’s wife and child.

Scamarcio’s own connection to organised crime is an omnipresent cloud that hangs over his every move; a cloud that only gets darker as he become embroiled in a power play for the criminal elite. Does trading one problem for another, one side for another clear his debt or double it?

The Hit reads like a bare knuckles Mafioso story and police procedural in one, equally at home amongst Dennis Lehane (Joe Coughlin series) and Michael Connelly (Harry Bosch Series); top notch story telling from beginning to end, the best Scamarcio novel yet.

I was provided a copy by the publisher in exchange for an honest review.
Posted by OzNoir at 28 October No comments:

Review: DEAD IN THE WATER by Tania Chandler 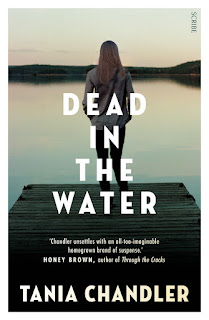 I was really impressed with Tania Chandler's debut novel, Please Don't Leave Me Here; a book that explored two very different and unique sides to her lead character Brigitte, a wife, mother and victim. The balance between crime and literary-like insight was perfect and complementary. The follow-up however, didn't hit the same chords.

Dead in the Water sees Tania Chandler return to Brigitte as she rebuilds her life following the events of the first novel. Living on a small island and married to a policeman, she spends a lot of her time traversing back forth from the mainland for work and day-to-day life. It's this daily routine coupled with Brigitte's inner turmoil surrounding her adulterous thoughts that consumes a large part of the novel. At times tedious and, for lack of a better word, boring, I found myself skimming over the chapters just to get to the parts of the novel which focused on the peripheral murder investigation.

The murder of a celebrity chef is the undercurrent that spans Brigitte's own encounter with death, yet again. Requiring the reader to suspend belief is part and parcel when reading fiction, but the amount of bad luck that follows Brigitte is hard to swallow, particularly as it's written in a way which is more sub plot than crime fiction - which is ok if you're into that sort of thing - I'm not.

Dead in the Water was an ok read which didn't match my expectations given how good Please Don't Leave Me Here was.

I was provided a copy by the publisher in exchange for a honest review.
Posted by OzNoir at 19 October No comments: 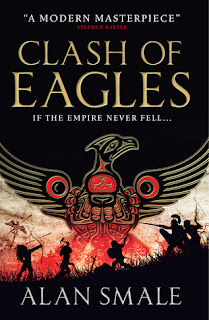 Imagine a Roman empire so mighty that it never fell and crushed all those who stood in their way as they pursued a never ending expansion across continents and into the fertile and dangerous lands of North America.

Clash of Eagles allows history to alter. Bringing the Roman army to the shores of North America and face to face with American natives. Steel swords and sophisticated battle strategy clash with poison arrows, stealth attacks, and the mound-building Cahokiani.

However, for The 33rd Roman Legion, led by Praetor Gaius Marcellinus on their quest for an easy conquest and acquisition of gold ends in a bloody battle at the hands of the fantastical flight warriors of the Cahokiani outside of Cahokia.

With Marcellinus the sole survivor, he switches allegiance and joins the Cahokiani, bringing modernised Roman warfare to Cahokia to give them the advantage in the never ending Morning War against their local enemy of Iroqva.

Clash of Eagles is loaded historical fact and a healthy dose of fantasy; author Alan Smale gets the dosage just right. Clash of Eagles reads as 'real' with a deep core character in Marcellinus and a Cahokiani supporting cast that I just want more of.

Beware, Clash of Eagles, while depicting an interesting side of life in Cahokia also has a fair amount of battle scenes, as you'd expect - they are gory, frenetic and not for the squeamish - but I liked them.

The first book in the Hesperian Trilogy is a great start with a semi-cliff hanger ending (don't worry, Clash of Eagles still feels like a complete read) that has me adding Eagle in Exile (book 2) straight to the top of my 'next to buy' list.

I was provided a copy by the publisher in exchange for an honest review.
Posted by OzNoir at 09 October No comments: