I read a total of 85 books in 2016 and while this number is well below what I've been able to get through in previous years the list is filled with quality books I've discovered throughout my 2016 reading journey.

Some highlights include the Hesperian Trilogy by Alan Smale, the first book in the series, Clash of Eagles, was published in 2015 and had been sitting on my review shelf for a while (shout out to Titan books for the review copy) but when I finally got around to reading it I was blown away and quickly bought the second, Eagle in Exile (pub 2016). The trilogy concludes with Eagle and Empire due to be published in March 2017 and I can't wait! This is the first 'best of' list that I've put together which features two books by the same author in the same series.

*Read the review of Clash of Eagles*

Another highlight of 2016 was the discovery of the Chinese sci-fi trilogy Remembrance of the Earth's Past by Liu Cixin, and in particular, book 2 The Dark Forest. While book 1, The Three-Body Problem, which I also read in 2016 was good and introduced some inventive concepts The Dark Forest was simply mind blowing. I've got Death's End, the last book in the trilogy sitting in my tbr and aim to read it in early 2017.

2016 also saw the return of some favorite series in The Cartel by Don Winslow (Power of the Dog) and The Four Legendary Kingdoms by Matthew Reilly (Jack West Jr.). I rated both of these near the top of the heap.

Another first of for my 'best of' list for 2016 is a novelization, The Nice Guys by Charles Ardai, this is one of those rare instances where the reverse adaptation outshines the original - but only just as the movie was great too.

*Read the review of The Nice Guys*

Here is my top reads of 2016 (includes any books read throughout the course of the year, not just those published in 2016):

*Read the review of The Scarlet Flush*

Pick Up A Pulp [15]: THE SPANKING GIRLS by Carter Brown 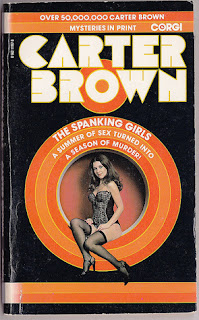 The Spanking Girls is not the typical Al Wheeler book by Carter Brown, in so much as it leans heavily towards the sleaze pulp sub genre rather than the dime store detective books Brown's perennial cop prominently features, so some 'buyer beware' is necessary for potential readers; if you're not into sleaze pulp with extra cheese then don't both picking this one up.

The title alone aptly captures what lies within the pages of this 1979 installment in the Al Wheeler chronicles; a young, attractive woman is found murdered at a beach house, the MO is pure evil; this wasn't a crime of passion, it's got hatred and determination fingerprinted all over it. So when Al Wheeler comes to investigate of course he's going to zero in on the attractive Elaine Matthews, daughter of the beach house owner who discovered the body of the victim shortly after arriving for vacation, notice her supple body and request a quiet drink or two while he waits for the 'meat-wagon' to take the victim away; reality be damned, throw sensibility out of the door while reading this book.

Wheeler has one thing on his mind and it isn't murder, and as the investigation unfolds 'The Spanking Girls' title takes on relevance; the victim and another attractive knock-out redhead who is friends with Elaine's brother (the brother who happens to have been dating the victim) work in the porn industry posing for mags specifically catering for the 'spanking' niche market - Wheeler barely contains himself; all previous sense of character is thrown out the window as Brown transforms his prime protagonist into a generic womanizer with no substance who bounds from one bed to another until the case is solved in a standard grandstand finale - the murderer, however, is easily discernible early in the piece which makes this grandstand finale a little less 'grand'.

The Spanking Girls is entertaining enough if you're aware of what you're getting into. It doesn't bring much to the table but is fast paced and easily read in one sitting. Certainly not the best of the Carter Brown books - I'd give this 2.5 / 5 stars.
Posted by OzNoir at 19 December No comments:

As the year winds down and 2017 approaches, I thought I'd tale a look back at the crime fiction reads that impressed me the most from this years batch of releases. While I haven't read anywhere near the same amount of books as previous years, 2016 still saw a number of quality crime books being published.

Here are my recommendations in no particular order.

REVOLVER is fine storytelling - seamlessly switching gears through alternating timelines to deliver a multifaceted crime tale, steadily increasing in complexity as the narrative unfolds. Spanning three generations each enveloped in heady blood red mist of murder and mystery surrounding the deaths of Philadelphia cops Stan Walczak and George Wildey in 1965, Swierczynski ensures his fictitious bullet fired some 50years past is still dangerous in the present.

The thief’s theme is rife in this cross continent noir by Aussie crime writer Andrew Nette. Gary Chance makes his hard earned cash from stealing others hard earned cash. He’s a professional in a profession where the big ‘pay-off’ is the pinnacle but prison is a more probable outcome – if not death. His latest job takes him to the Gold Coast but all is not glitter, gold and sunny beaches.

THE HIT by Nadia Dalbuono


Sex, lies, and criminal ties. A sudden and dramatic car crash leaves a top television exec dazed and confused; more so when he realizes a good Samaritan is a sheep in wolfs clothing, and is part of an elaborate ruse to kidnap his family. As Leone Scamarcio investigates the nature of the kidnapping a connection to organised crime and a shady brother in-law emerge as key pieces to the puzzle. With the investigation slipping away, and suspects mounting, Scamarcio’s lone wolf investigative approach might not be enough to save the exec’s wife and child.

BLACK SAILS, DISCO INFERNO is a criminally good novel that ripens the rotten forbidden fruit of romance amid the slippery red violence of the underworld in a classic retelling reminiscent of star-crossed lovers Romeo and Juliet.

THE EMERALD LIE by Ken Bruen

As with the previous books in this series, The Emerald Lie reads more as a character study than crime novel, with Jack, the glue that binds Bruen's noir enriched world of fiction together. Well known for being a drunkard and not one to shy away from drugs and violence, Jack once again dons the tried and true persona to great effect. His nonchalance customary to the crimes he takes as cases, yet he yields results inadvertently by virtue of proximity, luck, and shear will. The Grammatical killer, the antagonist with a not so obscure link to Jack, is the latest niche serial killer to wade into the cross-hairs.

THE NICE GUYS by Charles Ardai

Holland March is a private eye, hired to track down deceased porn star, Misty Mountains - wait, she's supposed to be dead right? Not according the elderly woman who swears she saw her briefly before Misty turned heel and did a runner from her home - the day after flipping her car and officially being declared dead. Jackson Healy is the tough guy who was hired by Amelia, a young woman with a striking resemblance to Misty, to put the hard word on a man (March) who had been snooping around her. The two cases collide in a wave of conspiracy, murder and evil schemes that neither could have predicted.

Posted by OzNoir at 06 December No comments: