Review: THE UPLOADED by Ferrett Steinmetz 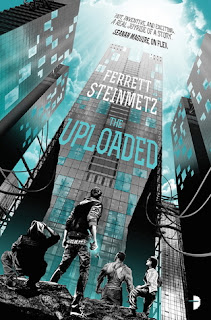 Publisher Angry Robot
Length 448 pages
Format ebook
Published 2017
Series standalone
My Copy provided by the publisher
My Review
In a world riddled by disaster, a teen with a pony finds a way to rid the shackles of the dead to breathe life back into the living.

The Uploaded, set in a distant future, sees the surviving populace serve as little more than slaves to actual ghosts in machines. The dead don't really die in this new world, rather, their living memories and sense of self are uploaded into a vast and wondrous server which renders their death irrelevant unless they are one of the few unlucky ones who have been judged by the dead to pass into the void - real death, as a result of their criminal acts.

This book has a great concept that builds as the story wades deeper into steadily crumbling real world, and ever expanding technological advancements of the virtual space. It's a young adult-ish book that will find a place among readers of Ready Player One by Ernest Cline and Permutation City Greg Egan.

My rating: 3.5/5 stars. The protagonist, Amichai took a little while to grow me. I thought the world building was great and some of the concepts scarily real. A completely different novel from the author of Flex, The Flux, and Fix (which I highly recommend checking out).
Posted by OzNoir at 28 September