Pick Up A Pulp [52]: SNATCHED and SAFEKEEPING by Gregory McDonlad 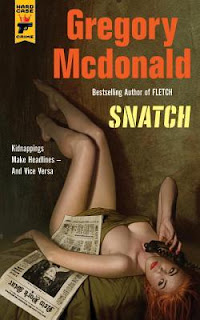 Published in 2017 by Hard Case Crime as a two-for-one, Snatched (originally published as Who Took Tony Rinaldi) and Safekeeping are kidnap capers with interesting and well developed characters who find themselves in compromising and unpleasant situation.


Form the synopsis, Snatched reads like a thriller laden with politics, lies, and deceit and whist there are lies and deceit aplenty the political angle was played down to the extend it was more background noise than prominent plot piece which allowed for the kidnap and events proceeding it to take center stage.

8yr old Tony Rinaldi, son of a prominent political figure is kidnapped by criminals who can only be described as blundering and semi-professional insofar as their plans are complicated by the comedic nature of their enterprise and penchant for self destructive behavior. It's like the blind leading the blind with no braille; this makes for some light heartened moments in what could've been a dark slice of crime fiction.

The short punchy chapters didn't skimp on detail and progressed the story at just the right pace, all the way through to the entertaining (though a tad drawn out) cat and mouse finale.

Safekeeping unfortunately didn't live up to expectations and was very nearly a DNF. I'm not sure the premise worked; a heady mix of satire and comedy blended with heartache, death, and a homeless orphan. It's a confusing concoction that doesn't mix.

8yr old Robby is pulled from his sleeping quarters at the boarding school he attends in England to hear his family has been killed following the bombing of their house; innocent victims of WWII. He's promptly shipped off to America to live with his 'uncle'; a man who turns out to be of no relation (nor has he a single parental bone in his body), a journalist, and well known in criminal circles. This 'uncle' irresponsibly sends Robby off on his own to find a school in New York because all young children 'know where to find a school'. Robby is kidnapped shortly after getting lost and the story just goes downhill from there.

If you're reading this two-for-one, I strongly suggest putting the book down after Snatched, Safekeeping just isn't worth it. 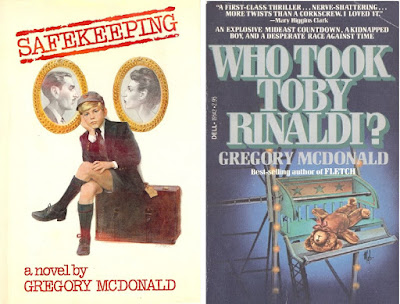 Posted by OzNoir at 27 September