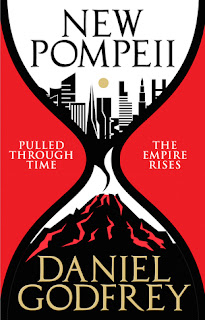 Publisher Titan
Length 459 pages
Format paperback
Published 2016
Series New Pompeii #1
My Copy provided by the published
My Review
Set sometime in the near future, man has conquered time travel – though with some limitations. An evil corporation has monopolised the technology and is using if for their own nefarious purposes; purposes that become clear as the novel progresses. Somehow they have managed to recreate New Pompeii, along with the actual residents of the city. On the surface, this looks to be the perfect set-up for study and exploitation in a theme-park/zoo kind of way, until people start going missing and then appearing in different timelines.

New Pompeii is a great idea that serves as an introduction to a broader tapestry of storytelling which is both a good and a bad thing. Good, as it means there’s at least another book on the way (Empire of Time), but bad because it comes off as merely setting the stage; the book didn’t read as a complete story, or even a complete story arc for that matter, ending in a quasi-cliff hanger that left me scratching my head.

The book sucks you in and delivers a story vastly different to what I was expecting. Despite my grumblings I’ll be picking up Empire of Time.